With better fitness, you could rock the bumps on Double Dipper in your spiffy retro britches.

It’s January, so by now you either survived the Holidays or you’re still recovering from National Hangover Day, also known as New Year’s Day. Or maybe “survived” isn’t the right verb. Maybe you’re sad that the Holidays are over.

Fun fact: They’re actually not over. Funny, weird and random holidays extend all year. Take January 3, for example. Bet you didn’t know that it’s Fruitcake Toss Day … in case you’re still harboring that dreaded hard-as-rock jellified loaf of dried fruit gifted to you by your great aunt or a Secret Santa with a vendetta. Fruitcakes are so dreaded that there are actually TWO holidays dedicated to ditching them. December 27 is deemed National Fruitcake Day but not because we are supposed to celebrate the petrified confection. Nope, it’s a day in which we’re supposed to jettison the despised cake.

But enough about fruitcake. Let’s talk about New Year’s resolutions, the tradition in which we resolve “to continue good practices, change an undesired trait or behavior, accomplish a personal goal, or otherwise improve our lives at the start of the new year.” Or so says Wikipedia.

Delving deeper, I learned that about half of us Americans make New Year’s resolutions. And according to a website called Statista.com, last year 50 percent of us resolved to get more exercise and improve our fitness. Another 48 percent wanted to lose weight, while 44 percent of us wanted to save more money. And since those figures add up to over 100 percent, I’m starting to doubt the statistical wherewithal of Statista (says the person who just quoted Wikipedia).

Still, though, the idea that half of us want more exercise and improved fitness sounds right. Right? Who doesn’t want to fit into those Carhartts from college buried at the bottom of the dresser drawer? Or those hot pink ski pants that you meant to donate to the “vintage” section of the Pico Ski Swap this year? With better fitness, you could rock the bumps on Double Dipper in your spiffy retro britches.

Except my, um, extensive research found that only a small percentage of us actually keep our New Year’s resolutions.

No surprise, though. Right? Did any of us really think we would “make more money” during a global pandemic? Or “lose weight” when working mere steps from the kitchen? Or, like me, set wildly unrealistic resolutions over which we have no control: like “write a best-selling book.”

To stick with our resolutions, I learned, it’s best to be SMART—set specific, measurable, achievable, realistic and time-bound goals. Instead of resolving to “exercise more,” we should specify what exactly we plan to do. Like 25 pushups a day … or 50 burpees … or 100 sit-ups….

But what fun are calisthenics?

What about this for a 2022 New Year’s Resolution, a Res-ski-lution, if you will? “I resolve to ski X days each week this winter” (where X is an integer between one and seven—ooo, sorry, too much math?). Or if skiing more often isn’t possible given your location or other responsibilities, what if we resolve to simply appreciate it more when we do hit the slopes? I mean, we’re sliding around on snow for chrissake! How bad could it be?

Come rain, snow, sleet, or hell-freezing-over temps, we will stick to that goal, getting out on the slopes each and every week, even for just a run or two. And we will find something to like—like soft snow on a rainy day or uncrowded trails when it’s cold. And if it’s sunny and warm, we can take a run or five and appreciate every single turn, dammit. Although we Vermonters don’t need no stinkin’ sun to ski. Give us a garbage bag when there’s a “wintry mix” falling, and we’re good.

But back to resolutions. Once we’ve set them, we need to beware. Peril lies in the days ahead. The January calendar is punctuated with random holidays to derail our best intentions to improve health and wellness. National Blonde Brownie Day (January 22) feeds right into National Pie Day (Jan. 23), with just a few days to recover before Chocolate Cake Day (Jan. 27). And who doesn’t want to celebrate Eat Ice Cream For Breakfast Day (February 6)?

But why would we want to? It might be a powder day. 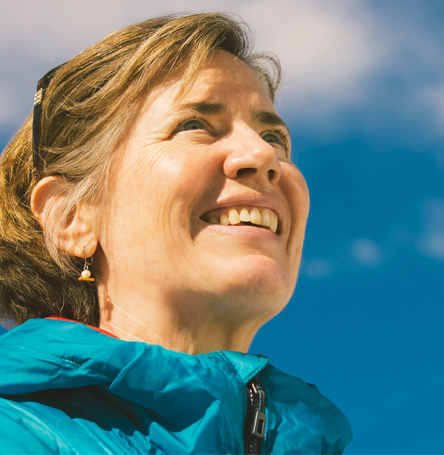 Peggy Shinn is an eighth-generation Vermonter, writer for TeamUSA.org and recent inductee into the Vermont Ski & Snowboard Hall of Fame. Her column “Vermontness” will be published regularly throughout the year. If you like it, please let her know.