Make a plan & look before you leap

sound like refrains from a high-school guidance counselor’s playbook. In fact, these are the basic rules listed at the top of nearly every terrain park drop-in, highlighted on a brightly colored placard designed to catch and retain your attention.

But wait a minute—did you say “rules?” Wasn’t freestyle snowboarding (and, we admit, that other sport, wherein a snowboard is split in two lengthwise and the user stands on two planks facing directly downhill) founded on the ideal of breaking rules or at least defining them for yourself? Yes, we’ll allow there’s a bit of a conflict there. But without digressing too far on a nostalgic “back in the day” tangent, we’ll address that conflict with the following—at one point, terrain parks simply didn’t exist.

Way back in the mid ’90s, some very persistent snowboarders lobbied for using snow cats and hand shovels to create exclusive areas full of jumps. And thanks to some very forward-thinking resort owners, it worked. Now, pretty much every resort has a dedicated terrain park (or two, three, four, five or six if you’re lucky)—ubiquity that can lead to taking these playlands full of tabletops and handrails for granted.

Back to those rules.
They are what allow resorts to offer you a dedicated venue for progressing your tricks and/or getting worked, depending on the day. Indeed, understanding the history of the terrain park is the first step to understanding its culture. Because the goal here isn’t to simply survive the terrain park. The point is to move from being a liability in the park to experiencing it as the builders intended. Go with the flow, and you’ll see just what we mean.

From first timers to experienced park riders to crusty old timers, here are five ways to respect the etiquette of shredding, and sharing, your terrain park.
1. Check the Label: Every park has a sign at the top laying out the rules. Read them.

It starts here, literally and figuratively. “Easy style it” and “respect gets respect” may seem like noodly koans from a self-help book, but if you read the fine print, it’s all pointing toward having a good time and avoiding unnecessary bails.

From top to bottom, this advice is simple and solid: take a “dry run” and look at everything in the park before blindly committing and finding yourself needlessly simulating free fall. Make a plan and have a strategy for how fast you’ll need to go and where your landings will connect to your next takeoff. Start on smaller features to build confidence and skill before stepping up to the next level. And bring your A-game when it comes to respecting other riders and skiers, especially if you expect the same from them.

Seasoned riders often zip right past these signs, and newcomers might be overwhelmed by all the eye-popping orange and yellow. But everyone could benefit from taking a few minutes to dig into these rules and tips. You’ll find that the advice is all pretty well thought out and lays a foundation for taking full advantage of the terrain park.

2. No standing/sitting in landings and blind spots.

Sure, that long downhill slope seems like a perfect pitch to get comfortable, pull out your Kindle or check your Tinder profile. We aren’t judging. But it’s really uncool if that steep slope you’re Instagramming from is actually the landing of a tabletop. Or if that weird metal tube uphill of your selfie is actually a handrail with a blind landing.

In both cases, riders and skiers are headed downhill, launching into the atmosphere or onto a feature at full speed. And guess what? They can’t see you from the approach. And they don’t have the ability to alter basic physics and make a quick course correction while nuking through the air if you’re in the way. Your next status update could well be: “Learned a lesson today. Don’t post up in the landing, unless you want to BE the landing.”

Either way, the rule here is if you don’t understand what parts of the terrain park are landing areas or blind spots, do everyone a favor and make sure to look at the flow of activity in the park. Or just ask before you post up—more often than not people are happy to provide direction.

3. Lay off the sidehits.
‍Hit the features as intended.

So you’ve dialed in the whole ride and ski downhill thing and dropped that habit of stopping and standing under the landing of massive kickers and closeout handrails. Now that you’re paying attention, it turns out there are wedge-shaped hits everywhere! They all lead to metal tubes, rails, even walls. But who needs to hit those scary-looking features when it’s a blast to simply flop off the side?

No flopping allowed. This isn’t the NBA, folks. If you aren’t actually going to hit the feature, don’t hit the approach. It turns out that all those little bumps are actually jumps and takeoffs that the terrain park staff has built, groomed and raked specifically for each feature. And side hits mess them up, create more work and make you look like a kook. Plus, there’s usually a beginner park right on the next trail with plenty of ride-on boxes, rollers and other easy going stuff. I know because I still session it. 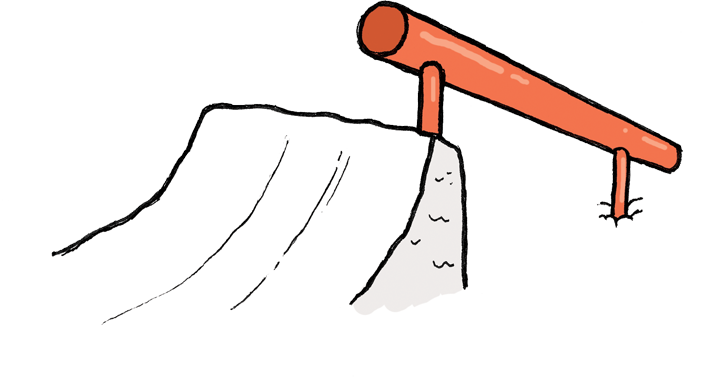 4. Temper tantrums when you miss a trick are lame.

So you’ve read the rules, you no longer picnic in landings and you’ve dropped your sidehit habit. You’re hitting the features as intended, working on a boardslide and that floppy nose-press (me, too!). Or heck, maybe you’ve been attempting that hardway 270 to pretzel out all day on the same rail.

Learning new tricks can be frustrating, but we don’t need to know the depths of your inner anguish, how many other times you landed that trick or just how much your gear is holding you back from greatness. The next time you don’t get a full pull on the rainbow rail or come up short on a hand plant, channel your inner Gandhi. Do some deep belly breathing while contemplating a lotus leaf floating on the gentle ripple of a pond. Count backward from one billion. Whatever you’ve got to do. The rest of us are having a pretty fun time over here, and temper tantrums are just lame.

5. Be Aware / Stay out of the way.
If you’re going to hang out and watch, do it from an out-of-the-way location.

Maybe someday you fall in love, get married and start a family. We know things are moving fast, but that’s just life! And your little grom? Yeah, he/she is ripping, and yeah, you’re going to be there to capture all the progression, each and every turn and trick, in full 4k video. Fortunately, there are already nice, wide-open spots to view and watch at the top of the park. And the bottom of the park. And throughout the park along both sides.

How do you get from that first hit to the next and make sure you capture all the action? Pay attention to where the actual jumps and features are. Are you filming from the approach of a handrail? Watching from the middle of a tabletop deck?

If you answered yes, please proceed to the side of the trail, head straight down to the bottom and try again. Johnny and Susie Shredalot will still be making progress next run, and they’ll be even more stoked that you didn’t cause a crash, get landed on or become the object of ridicule due to blocking the quad kink while yelling “Good job, Johnny!”‍